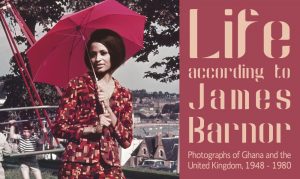 The French Institute of South Africa and the Alliance Française of Johannesburg, in partnership with Galerie Clémentine de la Feronnière, are pleased to present some of the best work of Ghanaian photographer James Barnor at the Gerard Sekoto Gallery, from 12 September until 11 October. This exhibition has previously been presented at the Rencontres de Bamako in 2017, and at the Museum of Photography in Saint-Louis, Senegal, in 2018.

Life According to James Barnor offers an interdisciplinary view of the pivotal themes of his work, chosen by the curator Clémentine de la Feronnière. The exhibition aims to go beyond a rhetorical categorization of 40 years of photography and draws inspiration in particular from James Barnor’s final photographs in Ghana in the 1970s and 1980s. Relatively unexplored until now, they have emerged as symbols of the accomplishment of his work, characterized by a lightness, a freedom and a “joie de vivre” that are shared by the subjects in Barnor’s photographs.

Born in 1929 in Ghana, James Barnor experienced first-hand his country’s independence as well as the formation of the diaspora to London in the 1960s. In the early 1950s, he opened his famous Ever Young studio in Accra, where he immortalised a nation craving modernity and independence in an ambiance that was animated by conversation and highlife music. He was the first photo-journalist to collaborate with the Daily Graphic, a newspaper published in Ghana by the London Daily Mirror Group. Close to Drum, an important lifestyle magazine founded in South Africa in 1951 and symbol of the anti-apartheid movement, he did several assignments for them in a climate of euphoria and celebration. In 1959, two years after Ghana’s independence, Barnor left for London, a city in the throes of becoming a multicultural capital, to further his photographic knowledge. He discovered colour processing at the Medway College of Art and his photos were published on the front cover of Drum. He eloquently caught the zeitgeist of Swinging London and the experiences of the African diaspora in the capital. Towards the end of the 1960s he was recruited by Agfa-Gevaert and returned to Ghana to set up the country’s first colour laboratory. There he stayed for the next 20 years, working in his new X23 studio as an independent photographer in Accra. Today Barnor lives in the UK devoting most of his time to his work, in a spirit of transmission.

After graduating in management studies from the Paris-Dauphine University, followed by postgraduate studies in publishing and ten years working as a fine books editor, Clémentine de la Féronnière created her own business in 2011: a gallery and publishing house showcasing contemporary photographic work, located on Saint Louis island in Paris. Each exhibition is complemented by the publication of a book which is then distributed throughout bookstores. The gallery is representing around ten photographers and represents their work at salons, fairs and institutions in France and abroad.

The Exhibition opens Wednesday evening 11th of September 2019 at the Alliance Française in Johannesburg. The Opening takes place from 18:00 to 20:00.We invite you all to experience this beautiful exhibition with us.Hope to see you there! 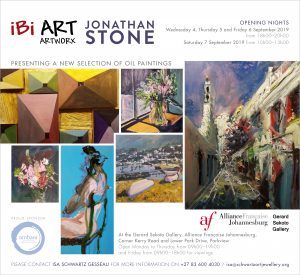 We are excited to announce that Jonathan Stone will be exhibiting his  beautiful oil paintings at the Alliance Française of Johannesburg in the Gallery Gerard Sekoto.

Jonathan studied architecture at the University of the Witwatersrand at a time where free hand was used to sketch.

“There’s a strong art theme that’s always run through my life,” he says. “But to actually get involved…has been spectacular” 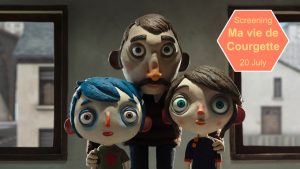 Two Saturdays per month, the French Institute of South Africa and the Alliance Française of Johannesburg invite you to the Dibuka Francophone Multimedia Library to enjoy kids activities!
On Saturday 20 April, bring your children to enjoy the great animation film MY LIFE AS A ZUCCHINI, sitting on the comfortable bean bags of the cinema loft.

MY LIFE AS A ZUCCHINI
Directed by : Claude Barras
Animation/Comedy/Drama
1h10
2016
In french with english subtitles

After his mother’s disappearance, Courgette is befriended by a police officer Raymond, who accompanies him to his new foster home filled with other orphans his age. At first he struggles to find his place in this strange, at times, hostile environment. Yet with Raymond’s help and his new-found friends, Courgette eventually learns to trust and might find true love. 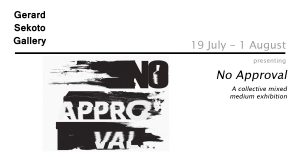 The Gerard Sekoto Gallery, in collaboration with the Faculty of Art Design and Architecture (FADA) at the University of Johannesburg,  is pleased to present No Approval, a collective mixed medium exhibition.

This collective exhibition entitled “No Approval” showcases the work of the young up and coming artists from the Faculty of Art Design and Architecture (FADA) at the University of Johannesburg. Each of the artists work focuses on personal themes that unite in their diversity. Spanning from sculpture, painting, printmaking and drawing, each piece is rooted in creating without the need of approval. Stretching away from conventional European models of thinking or creating, their work reaches into a new modality.